Snakes are often considered to be most venomous and deadliest creatures in the world. But this story proves that there is kindness residing in these fierce animals as well.

We normally think of king cobra as one of the deadliest snakes in the world, but here this snake turned out to be a hero for a couple of puppies, during the 48 hours they were trapped in a well.This is simply unimaginable.

Stories about people and other animals being rescued from snakes are posted frequently in the media, but this story is a completely different one. This story shows that not only people, but other animals, including deadly ones such as snakes also can understand pain and are sensible. This might sound strange but it is completely true.

This incident occurred recently in a Punjab state, where two puppies accidentally fell into an old well. Their trouble didn’t end there, once they fell into the pit, they saw a king cobra staring at them. The puppies were so small that they didn’t know what to do, and started crying, since they were hungry and scare.

Fortunately, the mother of those two puppies realised soon that her puppies were missing, and starting barking loudly to inform the owner. Soon, rescue teams were formed to search for the puppies.

It didn’t take them long to find the pups in the well. But, when they saw the cobra as well, they were shocked but quite surprised that the puppies were completely unharmed. In fact, they found that the cobra actually protected them and prevented them from moving to the dangerous sides of the well.It never even tried to attack the two, it was just guarding them. 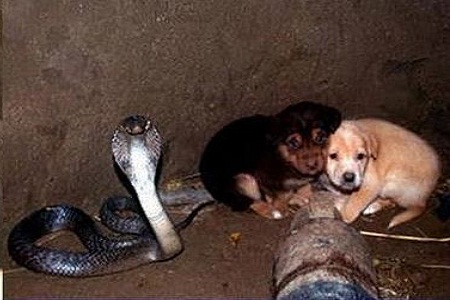 Finally, the puppies were rescued almost after 48 hours. The rescue team reported that the cobra didn’t try to attack them even once, in fact it actually cooperated with them by moving to a different side of the well so that they aren’t disturbed. The cobra too was moved out of the well and released into the woods.

This story is just incredible – the deadliest creatures in the planet too can understand the pain of others and are sensible enough to provide them a helping hand. Mother nature is truly amazing.