There are many kinds of people around us. Most of these people are interesting in their own ways. While some appear to be curious about many things happening around them, some make us curious to look at them through their activities. Chris Porsz is one such personality who has made the whole world turn towards him through an amazing thing he has done. What he has done is actually absolutely mind boggling. He has recreated the scenes of all his photographs taken between 1970 and 1990. Even to just think he has done it is stunning.

During his visit to Peterborough in Cambridgeshire, he has taken tremendous efforts to locate people in his earlier photographs. The heart touching manner in which he has tried to bring in everyone in the photo together amuses every on looker without an iota of doubt. He has done this after almost 40 plus years. He did not stop with the recreation. He has taken sincere efforts to compile the reunion into a book that captures all the 135 photos meticulously. Named as ‘Reunions’, Jo Riley has written the text part of the book explaining interesting facts about the people in the photos 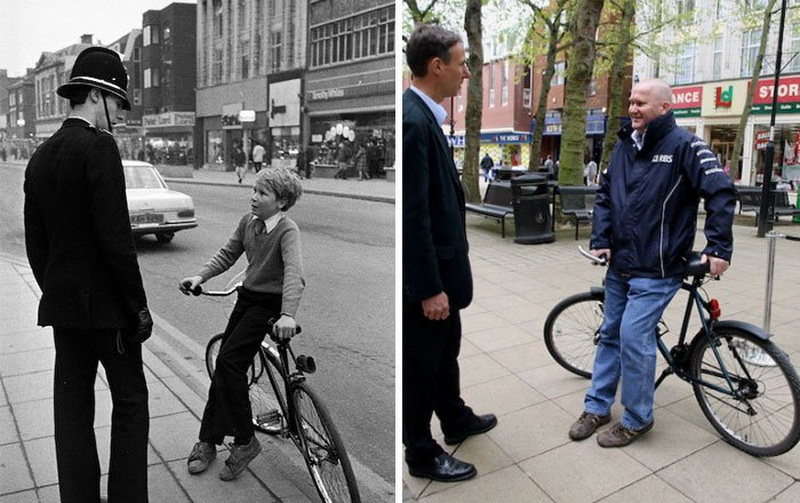 The first photo in this series captures David Harvey and Tim Goodman. The vast difference captured between the photo taken during 1980 and the recent one in 2010 shows not only two grown up men but also the other development in terms of the society. Tim Goodman, a father of six is now an established businessman. Having been Chief Superintendant for several years, David Harvey just retired from his services. 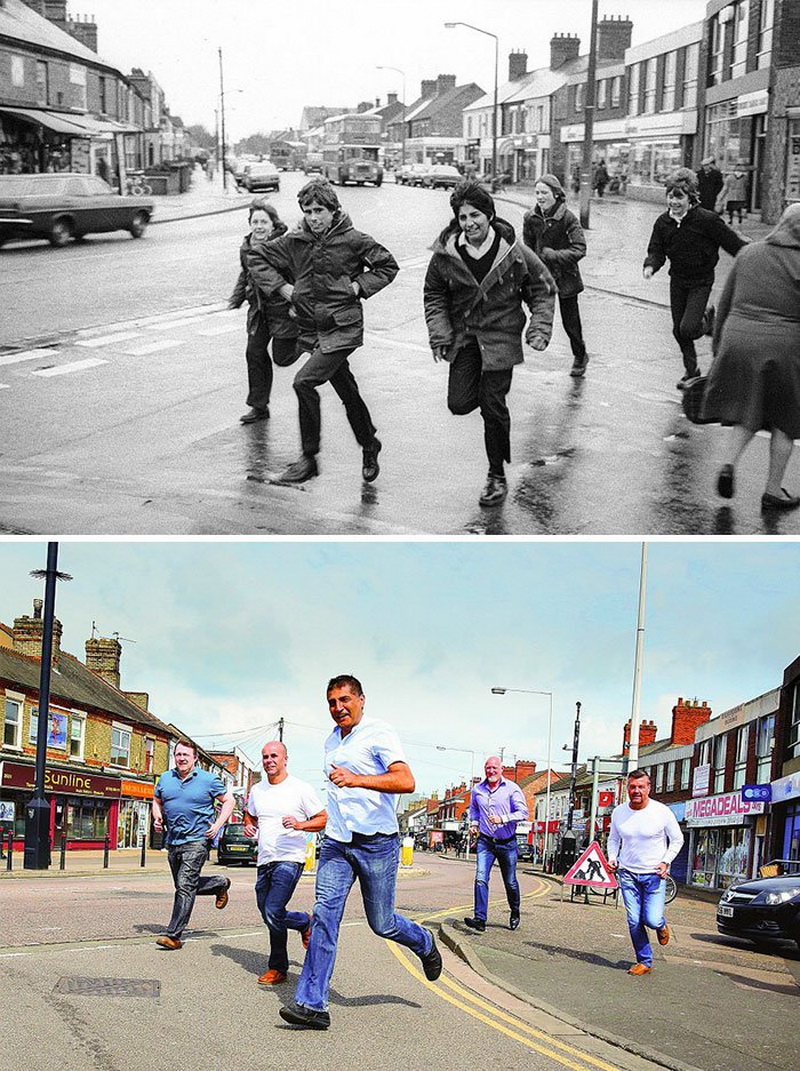 Devinder, Andy, Aaron, Richard and Tony James are the five boys running on the road. This photo captures the old age timeline in a picturesque manner. Currently, while Aaron is associated with Ikea, Richard is one of best Electricians in his region. Andy is serving in the army and Tony James is a well known Stone Cutter. Devinder is employed with the Housing Association. These five friends are happy that they met in life after 40 years thanks to the efforts of Chris Porsz. They intend to keep in touch going forward. 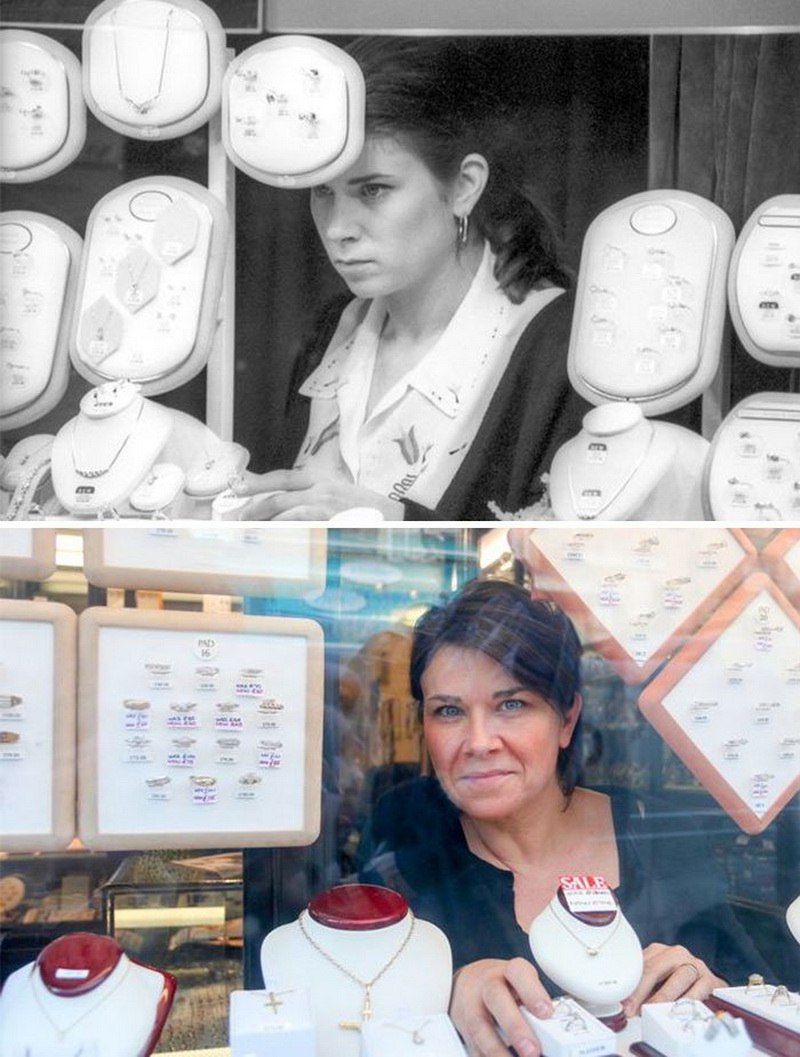 The old and new photos of Vicki Gracey, the Jewelry showroom Assistant shows the speed in which time has run between 1990 and 2015. The once Jewelry Showroom Assistant has worked in many employments like Restaurant and has settled with her two children in the heart of the City as a Tenancy Sustainability. She looks so matured and fun loving enjoying every bit of the old photograph recreation activity 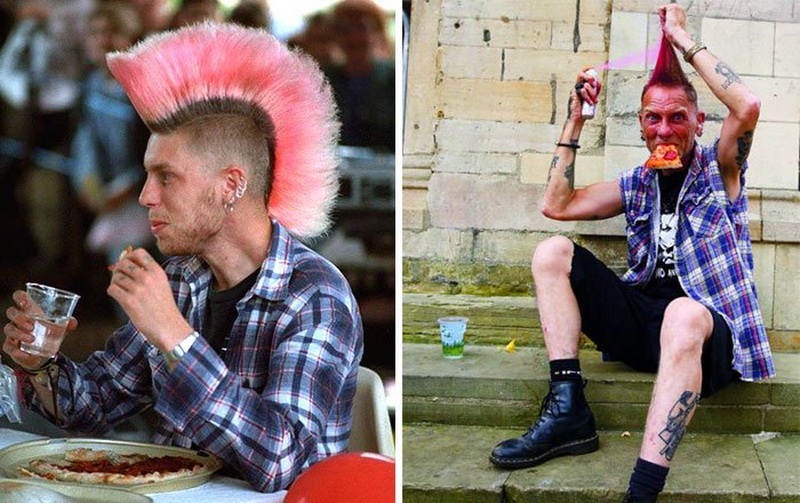 Looking at Badger Farcue in a 1985 photo and 2016 photo, not much change in physical aspects can be noted. Having won the Pizza Eating Competition earlier, Farcue right now resides in Somerset. He still remembers after almost 2 decades, how he participated in the Pizza eating competition and won due to the support of his friends when he was just 20 years old. He still reminisces how he enjoyed looking at his photo right in the front page of local newspapers at the time 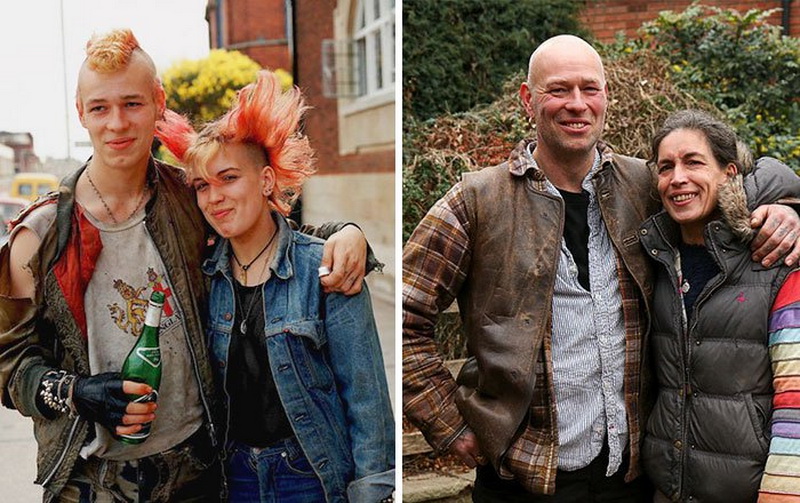 This beautiful couple who was photographed in the year 1985 near the Peterborough Cathedral was in their teens then. During the years that passed by, the couple has been blessed with twin babies. However, time has separated them. Dog leads his life as a Gardening and Hedge laying expert in South Wales. Tina is leading her life as a weaver in Dorset. Tine is too happy to remember that stage of her life when she used to have different style of punks 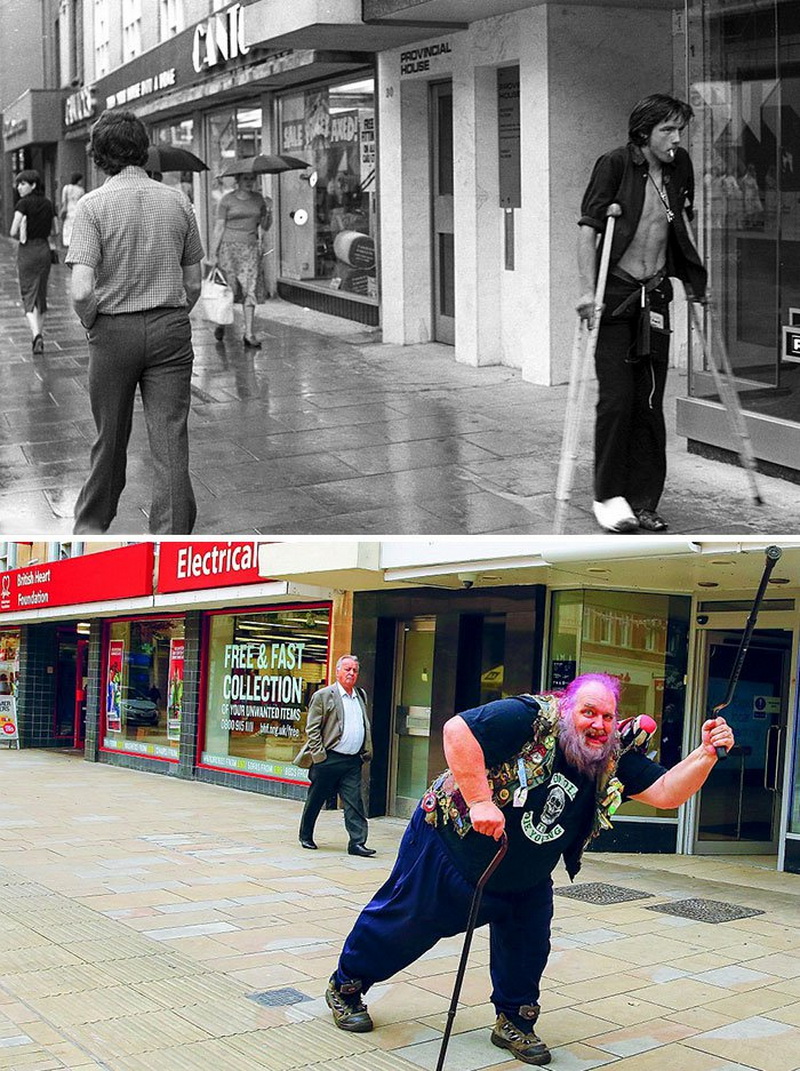 Steve Osborn, who is more known by his nick name Metal Mickey, is shown as a lean and lanky your man holding his crouches in the photograph taken in the year 1980. To see him as a jolly fat man in the recent new photograph recently taken melts the heart. He is known to have broken both his legs multiple times due the many number of motorbike accidents he met with. Father of 4 children, Old Steve is leading his life as a guitarist in Lincolnshire. Metal Mickey, despite his disability, has donated approximately 20,000 pounds to National Association of Bikers 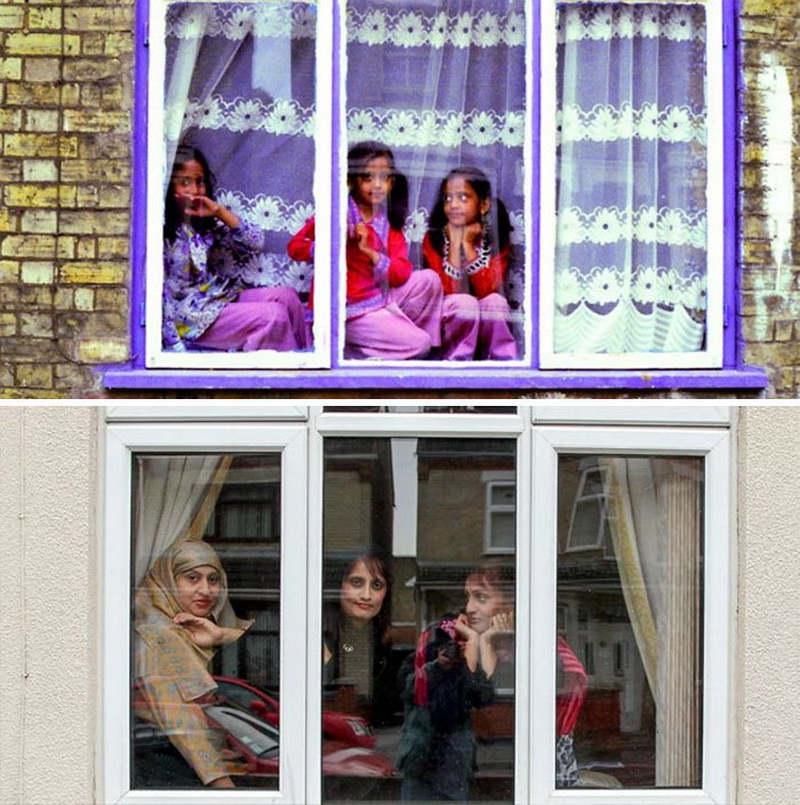 The three Sisters photo is an amazing one that shows the sisters as little ones and grownups. The photos have been taken in 1985 and 2013. Seated near a Window in their house located in Peterborough’s Cromwell Road in both the photographs, all the three sisters still spend their lives in Peterborough. From right to left, the sisters are Itrat, the eldest of the three sisters who has Rukhsana towards her right and Shehnaz Begum in the left corner. The three of them remember riding through the streets in their bikes on their bikes, with another set of twins in the same locality. They remember their mother saying that theirs was quite a big group.

Eighth Photo – A kiss in the platform 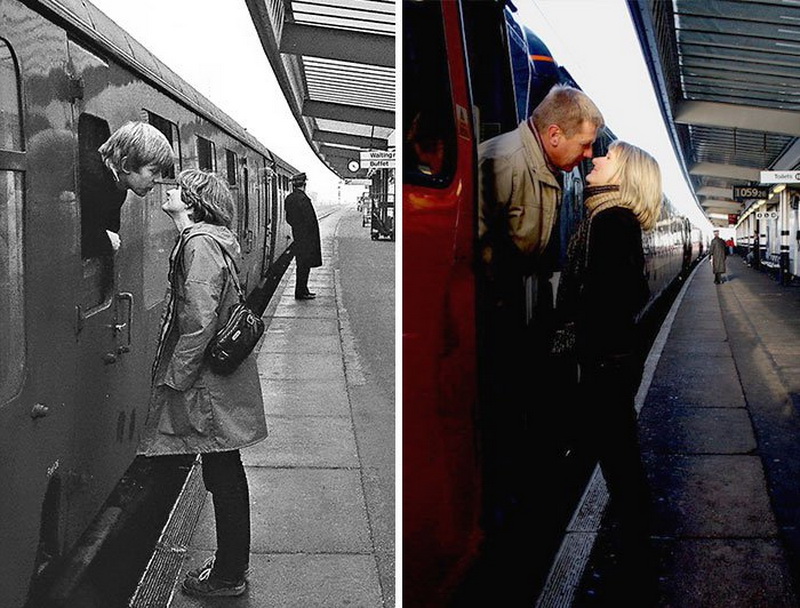 Sally and her boyfriend kissing each other in the Peterborough Railway Station have been captured in the old photo taken during the year 1980. They were astonished to see their photograph in the Peterborough Evening Telegraph which is a local newspaper. The recent photograph taken during the year 2009 kindled nostalgic memories in the couple. They have two grown up children who are in their twenties today and live as a family in Lichfield 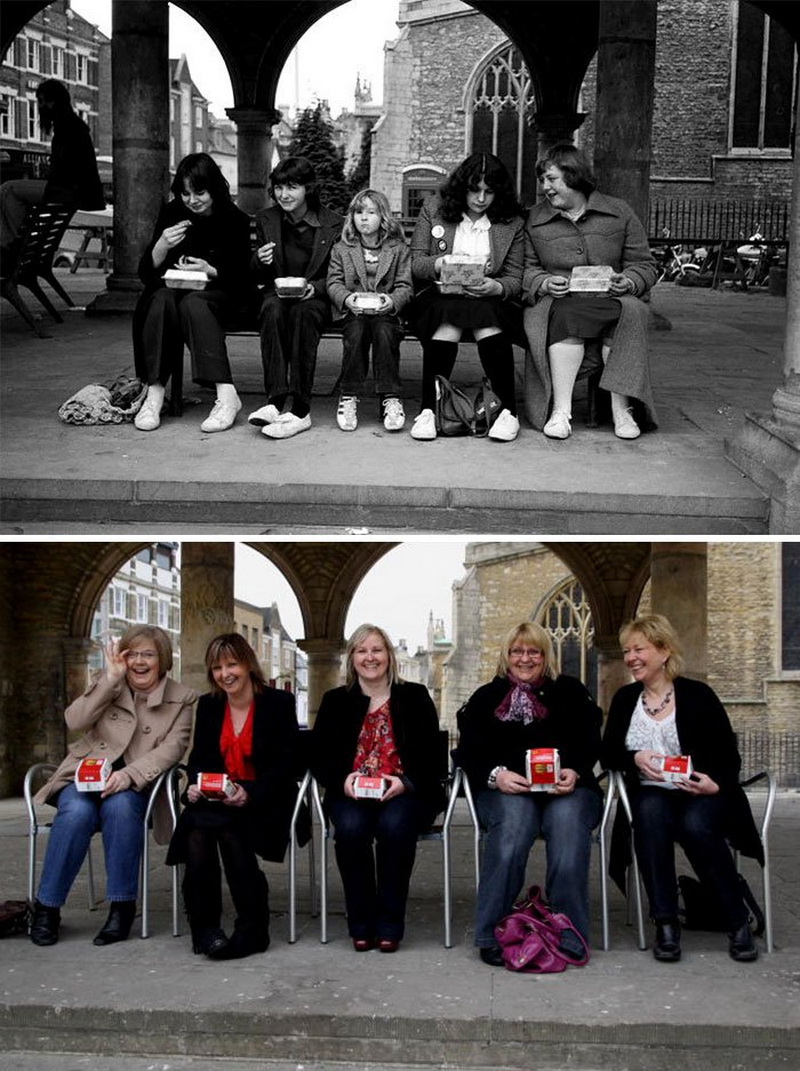 Looking at these photos, we tend to feel that time has only brought in physical changes in these five friends. Time seems to have only strengthened the bond of these five friends whose names are Penny, Juliette and the three sisters Carole, Louise and Sarah have been experiencing life in different ways. Both the photos have been clicked in Cathedral Square Guildhall. The girl in the right corner of the new photo is Alison, who is Juliette’s sister, who passed away in between the 30 years period which is the sad part of the story 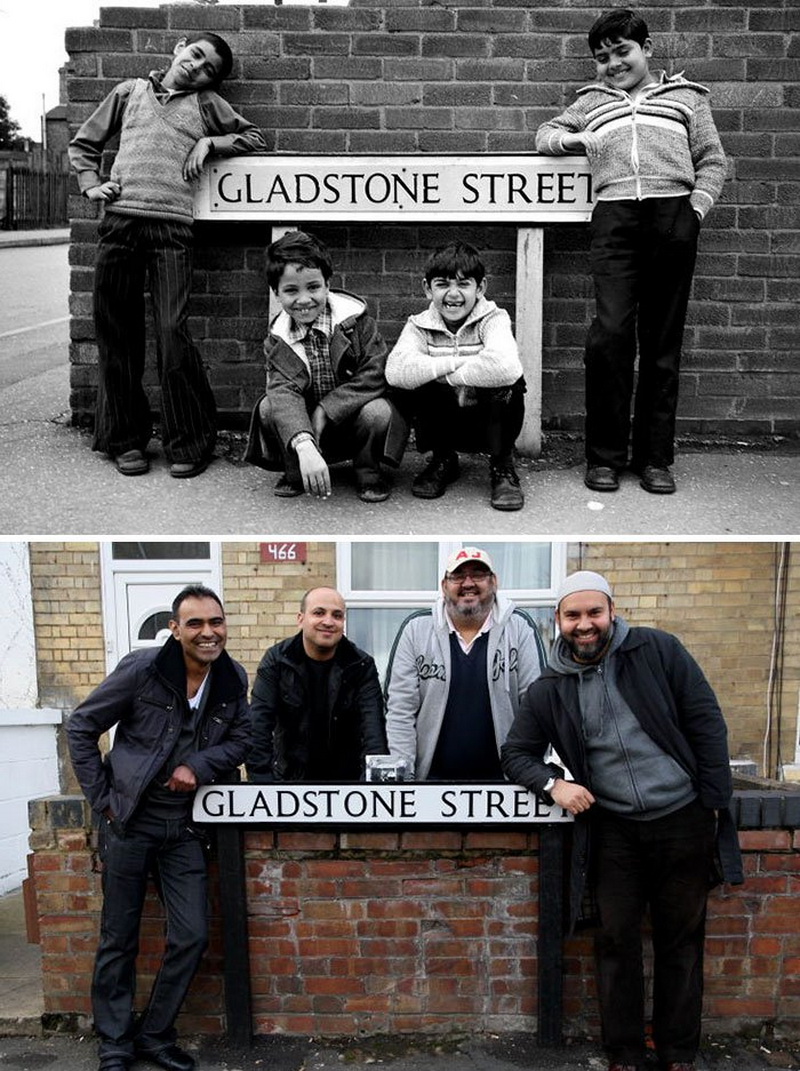 The surreal experience for posing for the recent photograph to recreate the old photographs taken in 1980 was thoroughly enjoyed by these four friends. Medler, who is one of the four friends comically, said that he took a very long time to dress up in a particular manner to pose for the recent photo. His family whined that he took a
long time in the bathroom for such a preparation.