Getting pulled over is never a fun experience for anyone. Some people often don’t admit their mistakes and vent out on social media about how the police were wrong for pulling them over. Needless to say, they also make false claims to make others sympathize with them.

Christy was one such person who was pulled over for crossing the speed limit, but instead of admitting her mistake she decided to leave a false review on the public page belonging to the same police department.

A police officer from the Owasso Police Department saw that review and decided to reply back, stating the false statements that she has written. 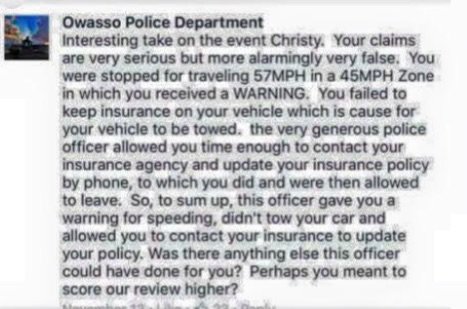 Christy decided to remove the review after reading the response. However, by that time, a lot of people from all over the world have read her previous review. They decided to leave positive reviews applauding the officer for preventing such people from posting false reviews.