Tamika Cross, an OBGYN was out of Detroit on a Delta flight when suddenly a man became unresponsive on the plane.

Being an upstanding citizen and a medical doctor, she reacted to the situation by immediately rushing to the suffering patient to analyze if she could help him, feeling it be her duty to help him. 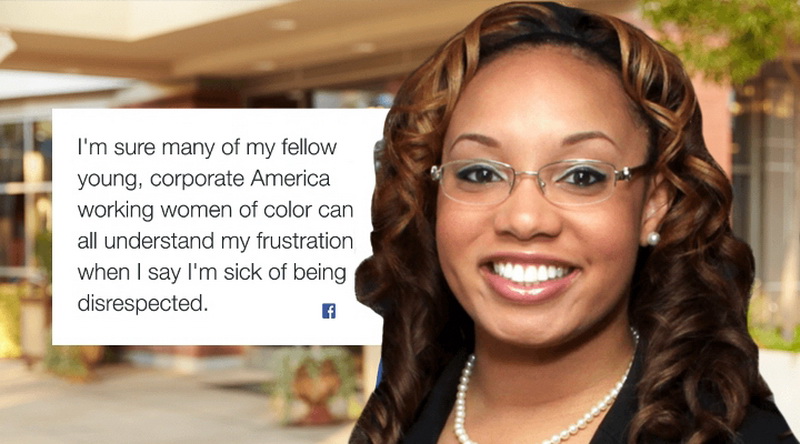 But she forgot in thinking about her duty that it is America, still full of racist idiots, like the flight’s crew, which ended up restraining the black woman doctor. Apparently, it was beyond their wildest imagination that a black woman could be a doctor.

She wrote about this sour experience she had on Facebook, filled with rage.

I’m sure many of my fellow young, corporate America working women of color can all understand my frustration when I say I’m sick of being disrespected.

Was on Delta flight DL945 and someone 2 rows in front of me was screaming for help. Her husband was unresponsive. I naturally jumped into Doctor mode as no one else was getting up. Unbuckle my seatbelt and throw my tray table up and as I’m about to stand up, flight attendant says “everyone stay calm, it’s just a night terror, he is alright”. I continue to watch the scene closely.

A couple mins later he is unresponsive again and the flight attendant yells “call overhead for a physician on board”. I raised my hand to grab her attention. She said to me “oh no sweetie put ur hand down, we are looking for actual physicians or nurses or some type of medical personnel, we don’t have time to talk to you” I tried to inform her that I was a physician but I was continually cut off by condescending remarks.

Then overhead they paged “any physician on board please press your button”. I stare at her as I go to press my button. She said “oh wow you’re an actual physician?” I reply yes. She said “let me see your credentials. What type of Doctor are you? Where do you work? Why were you in Detroit?” (Please remember this man is still in need of help and she is blocking my row from even standing up while
Bombarding me with questions).

I respond “OBGYN, work in Houston, in Detroit for a wedding, but believe it or not they DO HAVE doctors in Detroit. Now excuse me so I can help the man in need”. Another “seasoned” white male approaches the row and says he is a physician as well. She says to me “thanks for your help but he can help us, and he has his credentials”. (Mind you he hasn’t shown anything to her. Just showed up and fit the “description of a doctor”) I stay seated. Mind blown. Blood boiling. (Man is responding the his questions and is seemingly better now Thank God)

Then this heifer has the nerve to ask for my input on what to do next about 10 mins later. I tell her we need vitals and blood sugar. She comes back to report to me a BP of 80/50 (super low, to my non medical peeps) and they can’t find a glucometer. We continue down that pathway of medical work up, but the point is she needed my help and I continued to help despite the choice words I had saved up for her. The patient and his wife weren’t the problem, they needed help and we were mid flight.

She came and apologized to me several times and offering me skymiles. I kindly refused. This is going higher than her. I don’t want skymiles in exchange for blatant discrimination. Whether this was race, age, gender discrimination, it’s not right. She will not get away with this….and I will still get my skymiles….

This Facebook post of hers received approximately 145,000 reactions and 47,000 shares. But there is still no update on whether Delta responded to her remarks or not, but seeing the vigorous reaction this story has earned her, Cross is going to get a considerable amount of SkyMiles in the near future for sure.

She got a fully paid vacation to Tahiti, where we hope the flight crew is not an idiot bunch of racists.