Kim Kardashian, one of the most popular reality stars at the moment, has always been surrounded with controversies.

Since 2007, Kim’s b u t t has been a subject of controversy. The ridiculous size of her booty has raised several questions and has caused a debate among many. Is her b u t t real or fake? Are those really implants? What is her size?

Take a look at these top 11 photos of Kim Kardashian’s b u t t which prove that it is completely fake.

1. Before and After Look

Before you read on, you should take a look at these two pictures of Kim. The left one was taken in 2007, while the picture on the right was taken in 2014. The change is distinct;in fact,this can never happen naturally. Yet Kim keeps on claiming that her increased b u t t size is due to her American heritage, and due to squats in the gym. Let me tell squats might give you a bigger b u t t but that comes with thicker legs as well, which are clearly lacking in Kim. 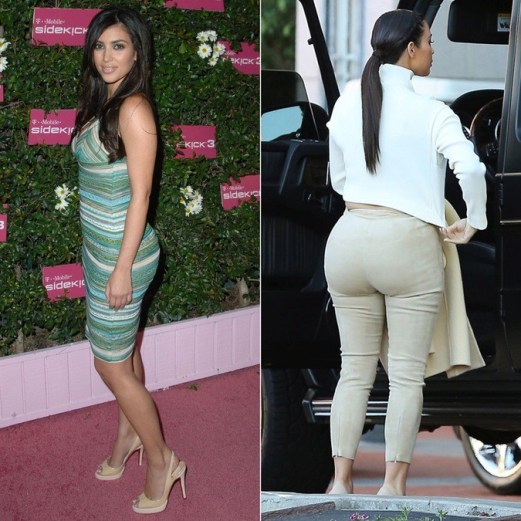 This photo was captured in 2006 – she wasn’t quite popular at that time. This was taken in a reality show. Many people thought she was actually an assistant of Paris Hilton! Her b u t t seems completely normal in this picture and the rest of her body is definitely in sync with the b u t t. 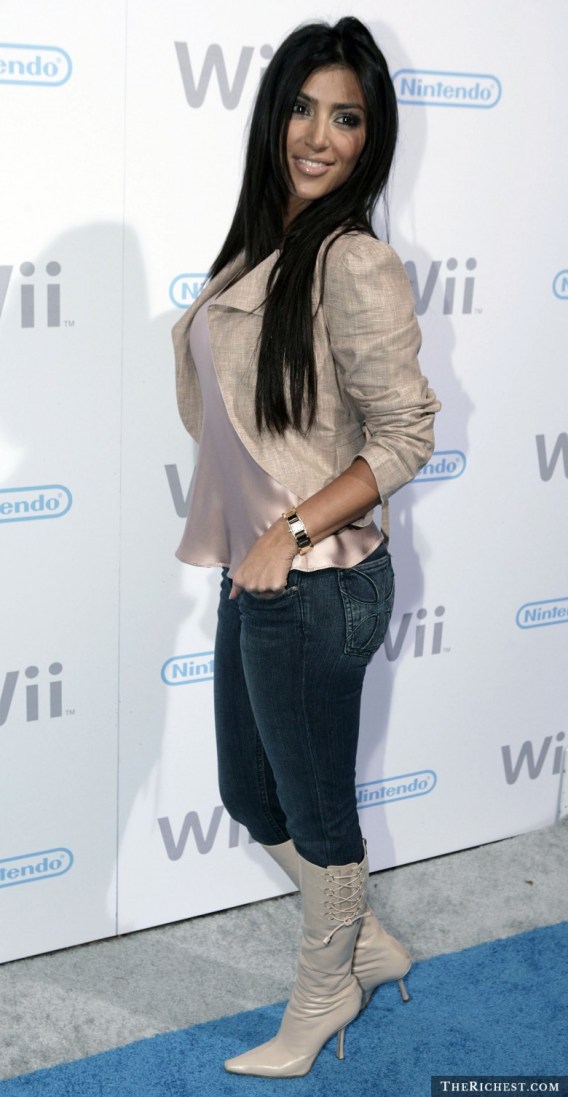 Kim Kardashian showed up in June 2007 in this bodycon dress and surprised everyone. She definitely had a good fashions sense, considering her curves were clearly seen in this dress. This was the time when she started gaining popularity as a reality star. Even in this picture her b u t t seems normal and nothing seems extraordinary. Although she can’t defeat Jennifer Lopez, the queen of the superstar booty club(at least not right now), she could definitely win a place at the top of the list. 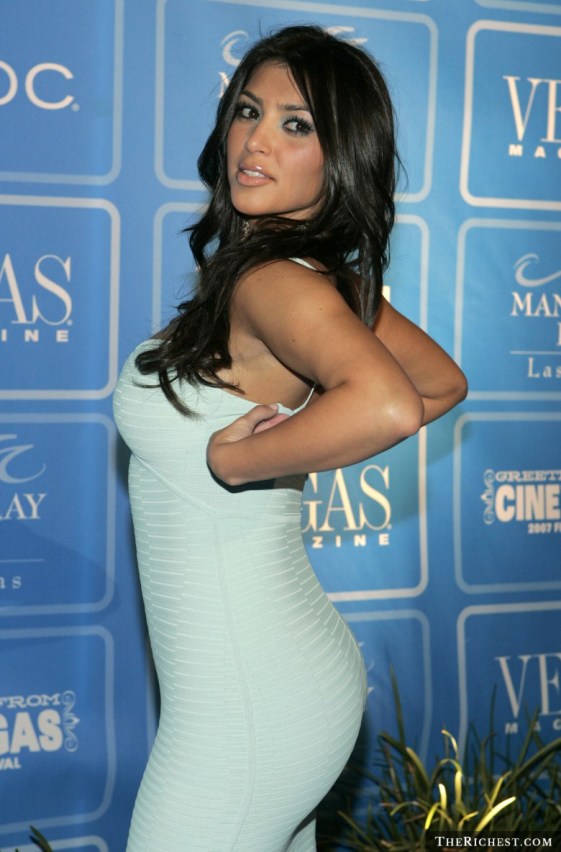 Kim started showing off more of her b u t t; this picture was taken in February, 2008. She wore a bodycon white dress, which showed off her booty in plenty. She also showed her signature pose, teasing her curves. 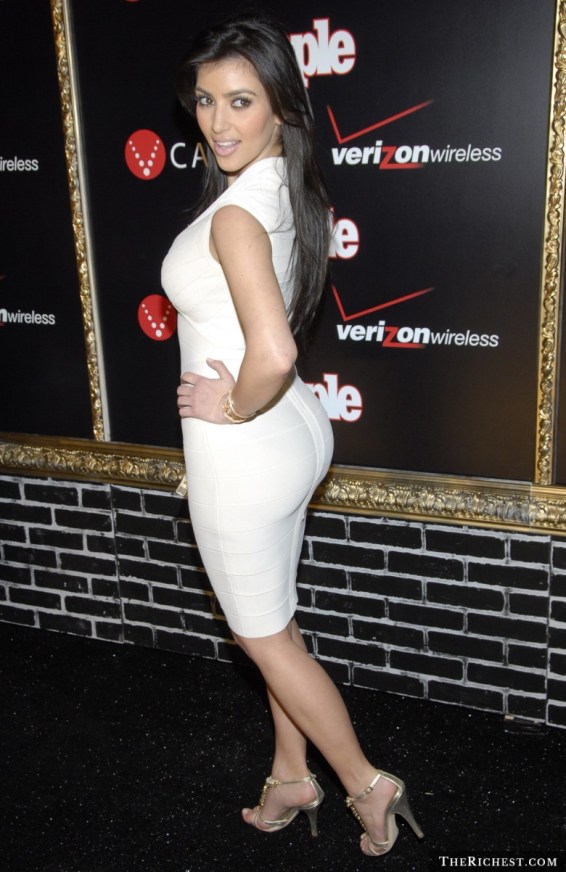 This picture was captured at the début of the film Transformers: Revenge of the Fallen in June, 2009. You can see that her b u t t is barely visible. Even though she is wearing a skin tight dress, her b u t t isn’t that pronounced. However, that didn’t stop her from showing her famous pose to give more attention to her booty. Right now, she seems natural and there is no evidence of any plastic surgery. 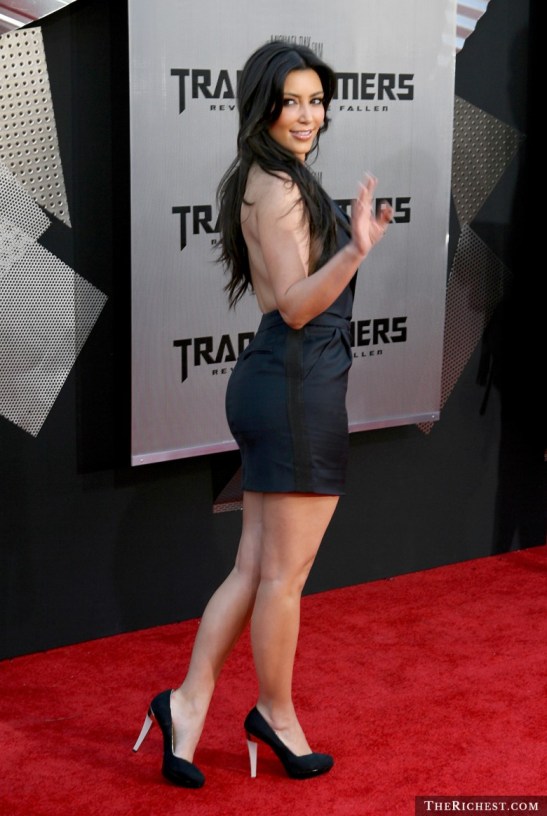 This picture was taken in February, 2010. Her b u t t seems bigger, but it can be due to the skin tight black midi dress she is wearing. Also, considering the size of her legs and booty size, it could be due to her joining the gym. She probablyhasn’t started any implant work till then. 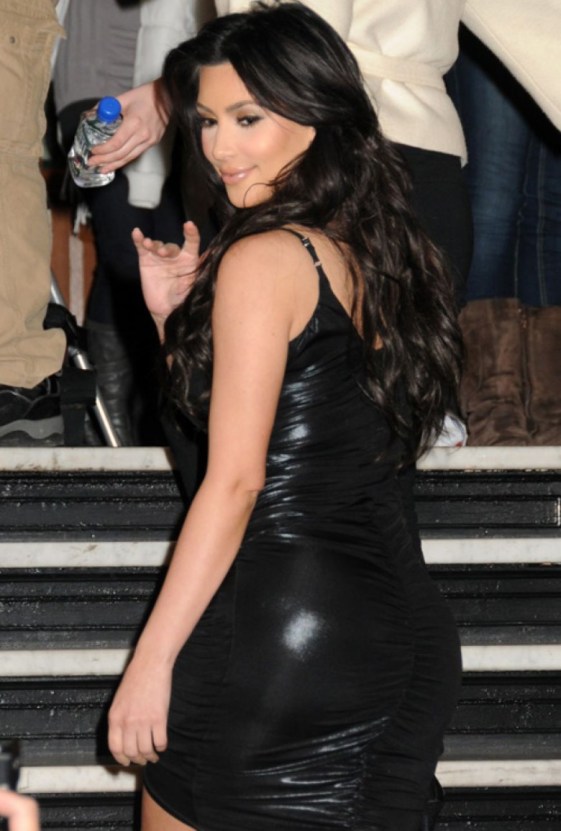 This picture was taken in April, 2011 which shows that her b u t t size has almost increased twice in size compared to 2010. Even then, her thighsremain slim which is a surprise, because this couldn’t have been achieved naturally or even by any exercise. When several allegations were thrown against her, she took an X-ray of her b u t t to prove this was natural and there were no implants. Ridiculous! 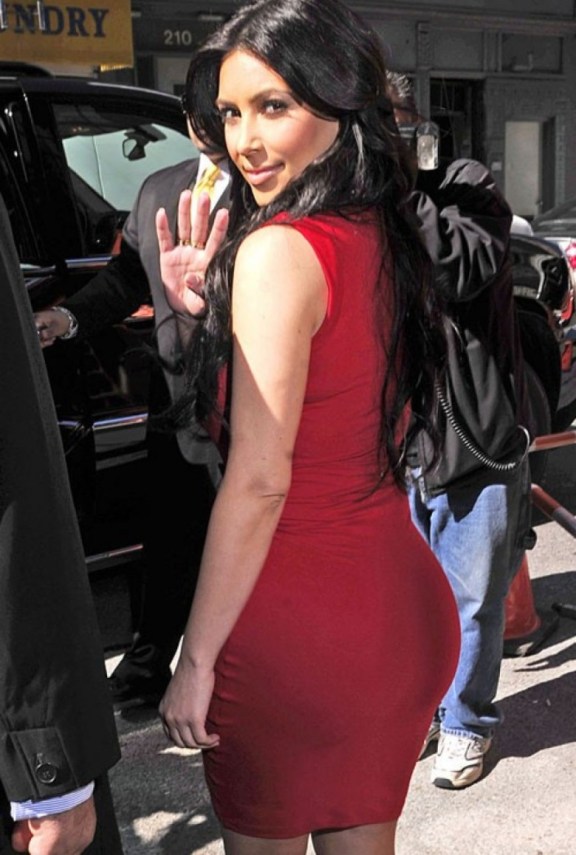 Kim’s b u t t size kept on increasing which became a popular topic for discussion in social media. This picture was taken in May, 2012. Comparing this to her pictures from 2009, it is evident that her b u t t size has increased quite a bit. Many people claimed it was fake and moreover, she was under a lot of stress since people claimed that she was in a fake marriage with Kris Humphries just for publicity. However, she denied them all. 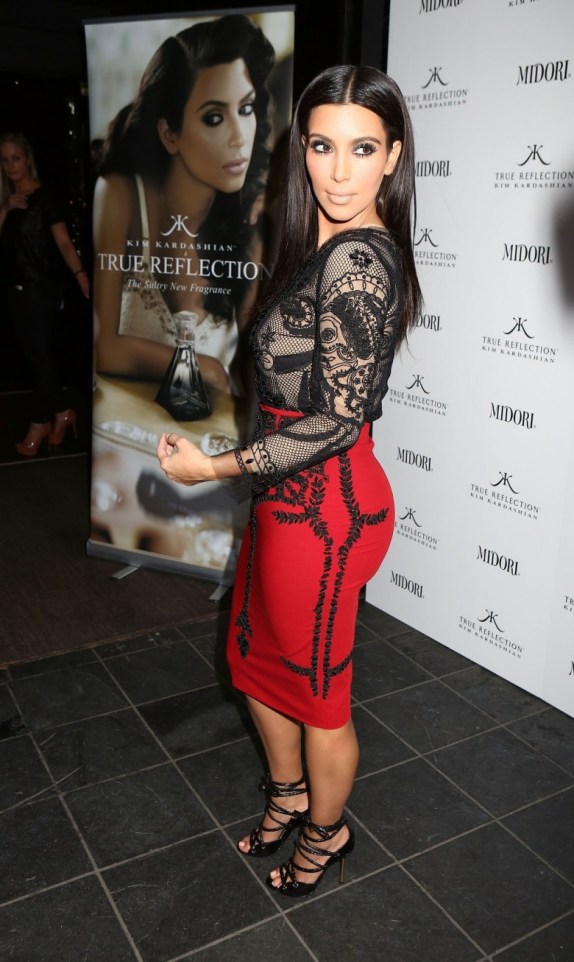 This picture of Kim’s massive b u t t was taken in 2014 and was posted on Instagram. A brilliant choice we must say. She deliberately took the picture in that pose to show her booty. It is clear that her b u t t size is now huge, still she denies ever having done any plastic surgery. 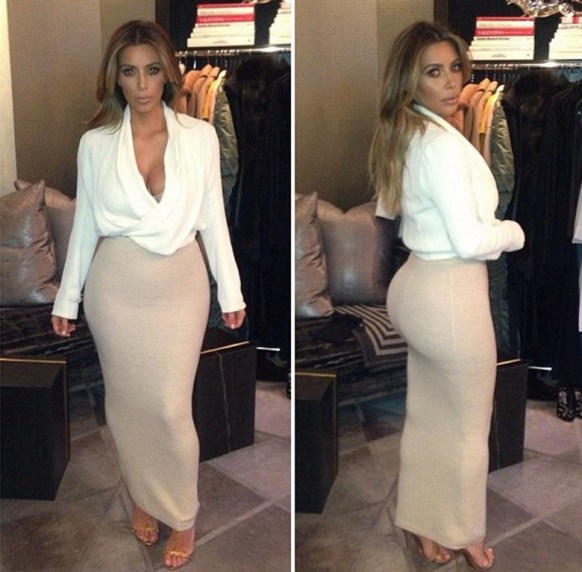 Time to move forward to 2015. This picture shows her massive b u t t. To be honest, I don’t have words to describe its size. What is even more ridiculous is the fact that she is slim and has thin legs. Check the lady’s reaction sitting behind her. Hilarious! 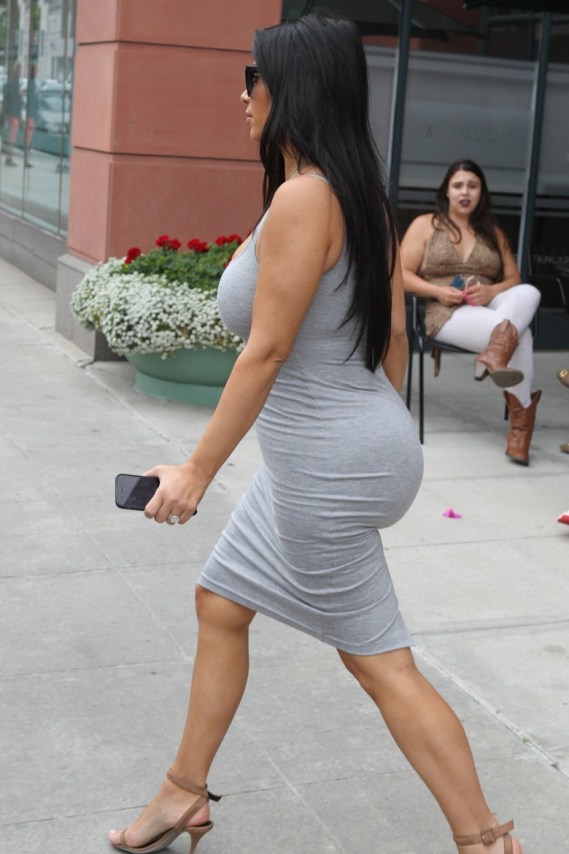 This picture was taken in April, 2016 by paparazzo where she was wearing a tight white dress in Miami, and her huge b u t t is distinct. Kim still claims that her b u t t is completely natural, still considering her complete figure, anyone can notice that her b u t t has no match whatsoever with the remaining body. So, we are sorry Kim but you should have been honest. 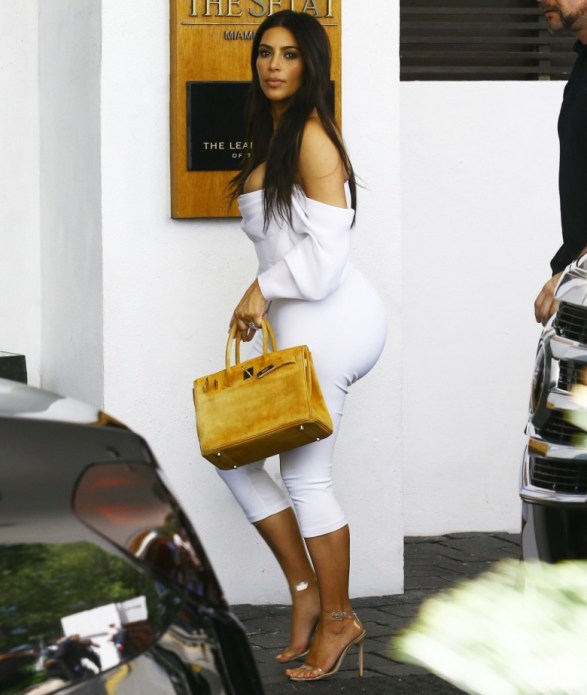