1. So starving is the key to stopping menstrual cycle. Sorry to say this is wrong, but what can you expect from a person who believes that menstruation is not natural 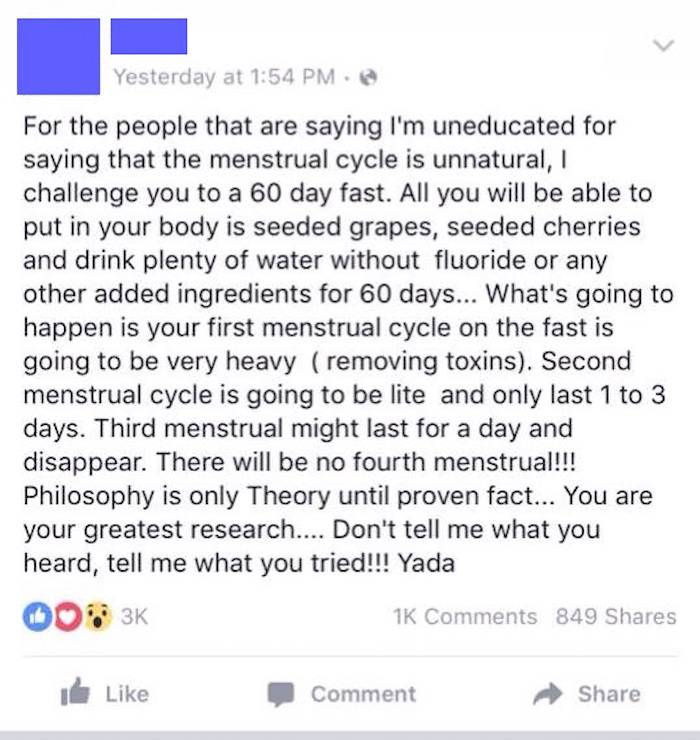 2. User _shsatan began a thread on Reddit where she had to explain that females don’t pee from their clitoris.

“I just explained to my husband(31) and Sister-in-law(26) that females don’t pee from their clitoris. What are the most bizarre ideas you have heard about the female anatomy?” 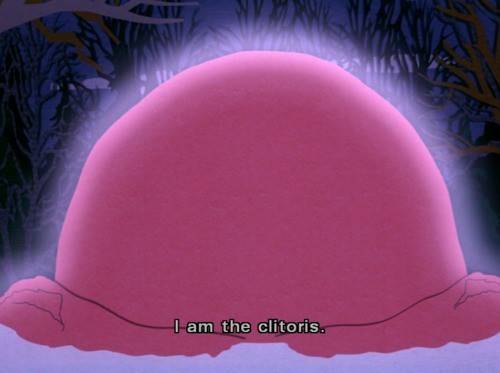 3. User thumper5 gave a reply to that which most women would have loved to be real but unfortunately is a myth.

“Holding period blood is similar to holding pee. My ex-boyfriend used to think that we can just hold it so wouldn’t stop at a gas station.”

ETA: For every period, only one pad or tampon is enough, and they aren’t essential for hygiene. 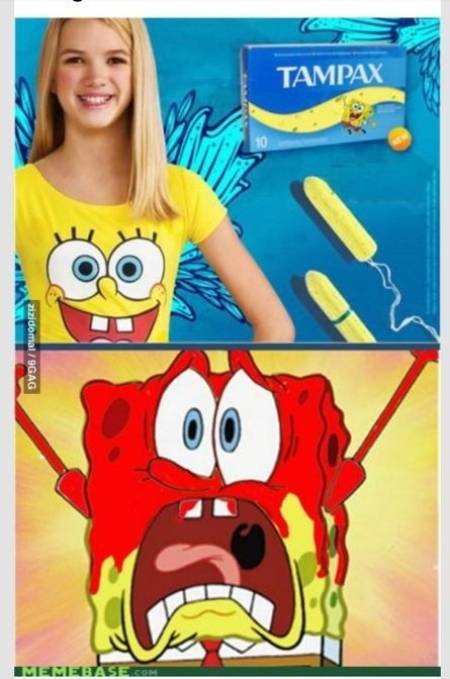 4. After finally understanding this post through the myriad of spelling mistakes, this woman thinks that build-up of years of semen is the reason behind smelly vag!nas. Unimaginable!

5. pizzaoverload found a YouTube comment where a woman said that several years of over training had brought back her period.

“Although I am a male, I have always felt that the period blood is body’s way of getting rid of the toxic blood. Some women believe that they are sick if they do not have periods, but I think that with proper exercise and clean diet, there will be no toxins in your body, so there is no need for periods. Hence, that is a good thing, it isn’t something you should be worried about. It seems that most women have toxins in their blood and the body tries to detoxify the system through periods. What do you think about this idea? “ 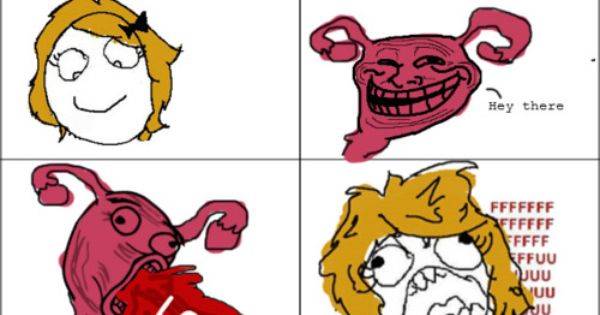 6. User wicksa, who is a delivery nurse by profession, shared several stories about these myths.

“I was waiting for this! I am a delivery nurse; hence I have heard a lot of weird stuff. Most of them are from mothers who are teenagers. “

A 16-year-old pregnant lady told her that if they douched with sprite, she wouldn’t get pregnant even after $sex.

“I wanted a c section since I was sure that it would be impossible for my baby to fit into my tight pussy. But the doctors didn’t listen.” It turns out there were no problems whatsoever during delivery, and the baby did fit through.

A 5ft. Girl, weighing around 120 pounds, who has a stomach the size of a beach ball, and who didn’t have a period in over nine months, came to the hospital with abdominal pains. They were actually contractions, and the girl claims that she had no idea that she was pregnant.

“I love nipple play during $sex, so I will not breastfeed because it might turn me on.” 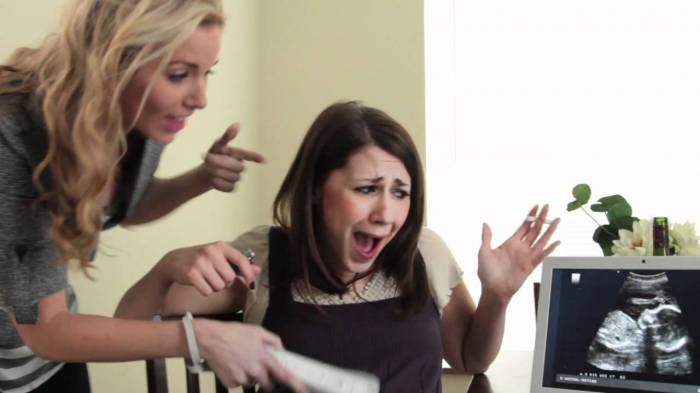 7. This man thinks that a woman’s vag!na size is related to the thigh gap, and says that he has no problem with women whose thighs touch 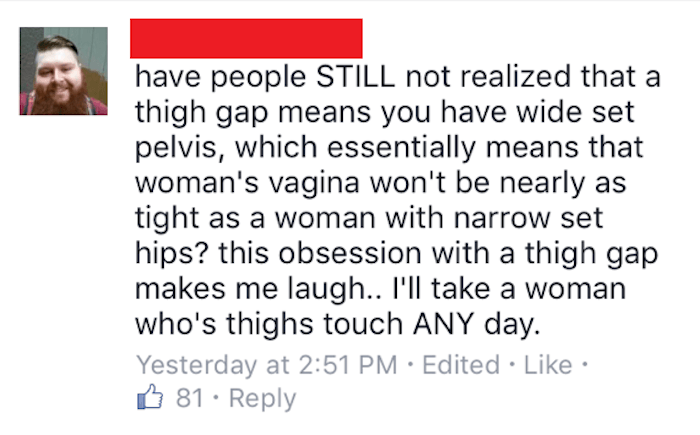 This isn’t the end. 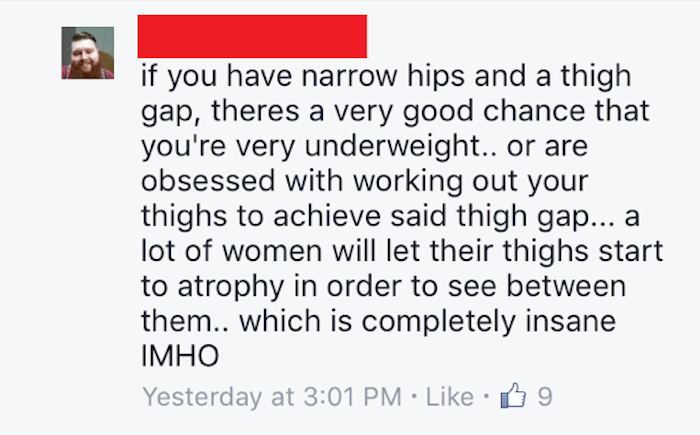 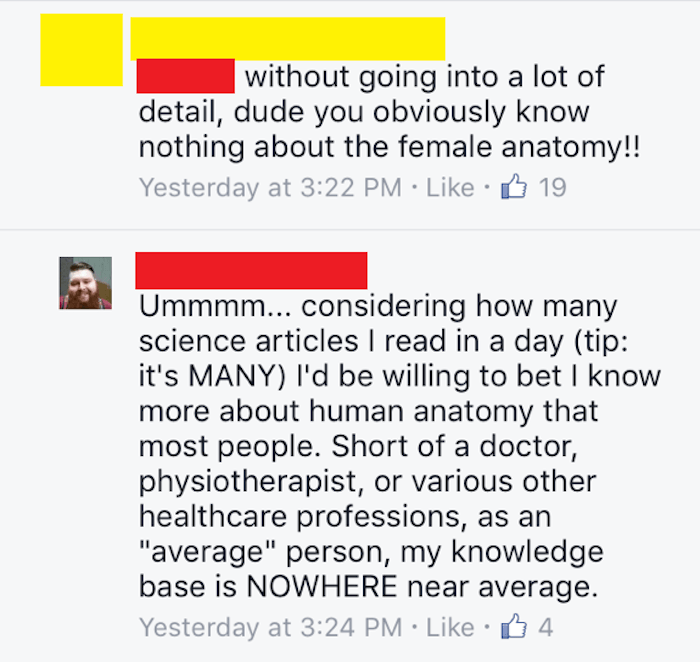 Finally, someone informs him that he is wrong and what it really is 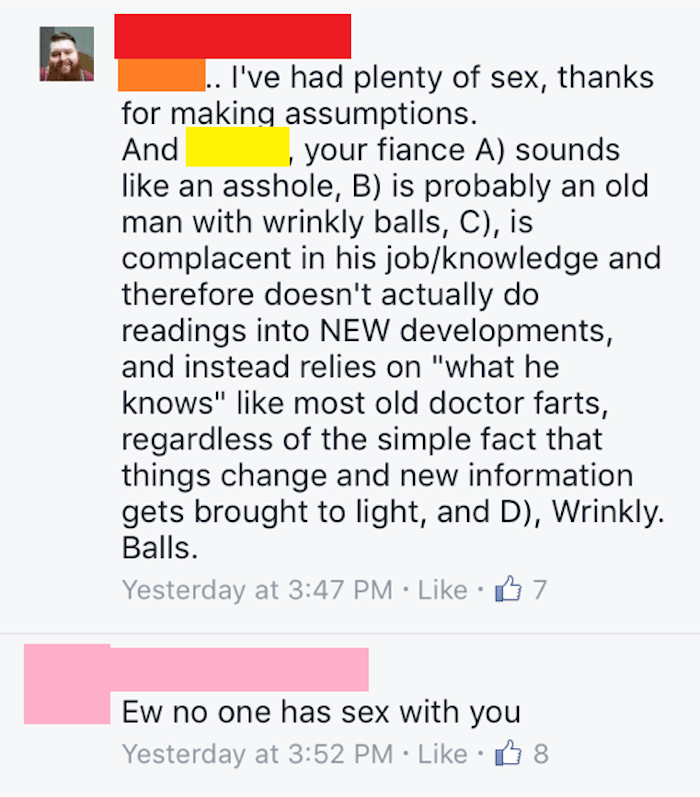 8. This commentator has given birth to two children, yet she doesn’t have the slightest idea about how pregnancy really works.

I believe that a baby needs more space. I have given birth to 2 children, and both of them preferred to move around and not get stuck in such a tiny space. I don’t think it’s a good idea to keep your baby in such a small space. Hence, I would advise you to not be selfish during pregnancy and try to work out as much as you can to stay slim. 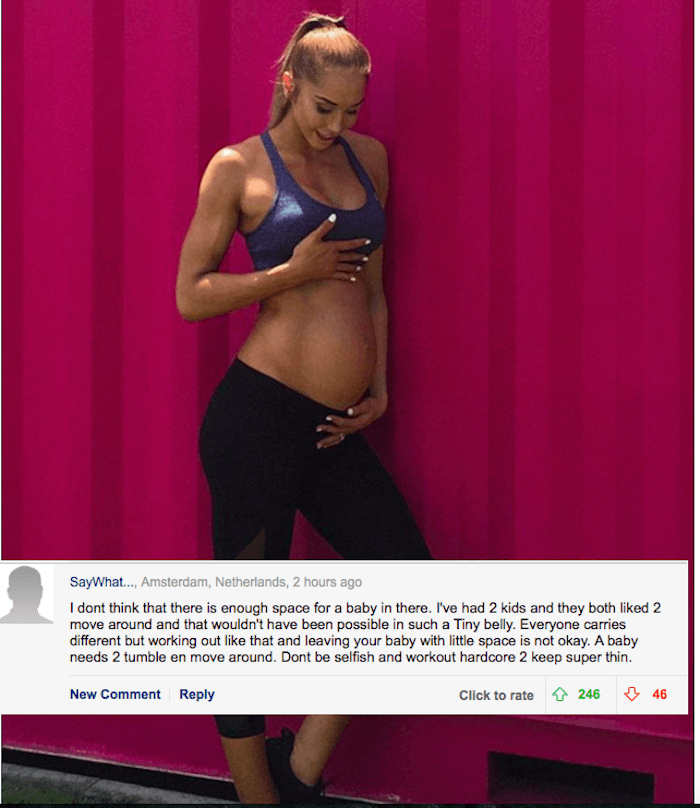 9. A $sexual assault investigator didn’t know what a cervix is and had to be explained in court. This is a true story.

During investigation of Kelli Smith’s case, where she killed a father of two children by driving in the wrong way, it was found that maybe she was given some sort of a rape drug which could have led to the accident. Investigation further revealed that the woman had injuries in her cervix and didn’t have any pants or underwear on at the site of the accident. Eric Stacks, who is supposed to be an expert investigator on $sexual assault was consulted. In court, Jennifer Bukowsky, the defense attorney then enquired about the injury.

Bukowsky: How many times have you seen such injuries to the cervix in a car crash?

Stacks: I don’t think I am following you here – whats a cervix?

Bukowsky: You have no idea what a cervix is?

Stacks: No. Can you please explain? 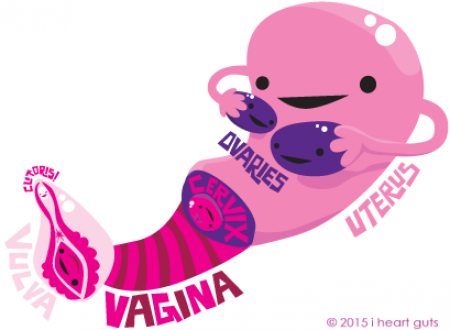 10. User katiedid05 posted this image on Reddit of a teenager who explains that the clitoris has to increase in length by 10 centimetre before giving birth.

“Your clitoris has to increase in length by 10 cm or else you won’t be able to give birth – this is the reason doctors say that 10 cm dilated is needed to push. Although I am not an adult yet, I am knowledgeable in this field. “

11. He tried to be funny, became the joke himself.

A guy tried to post something funny in the comments of an Onion article named, “Gunman Is In Shock Since He Has To Travel A Long Distance To Find A Planned Parenthood Clinic.” 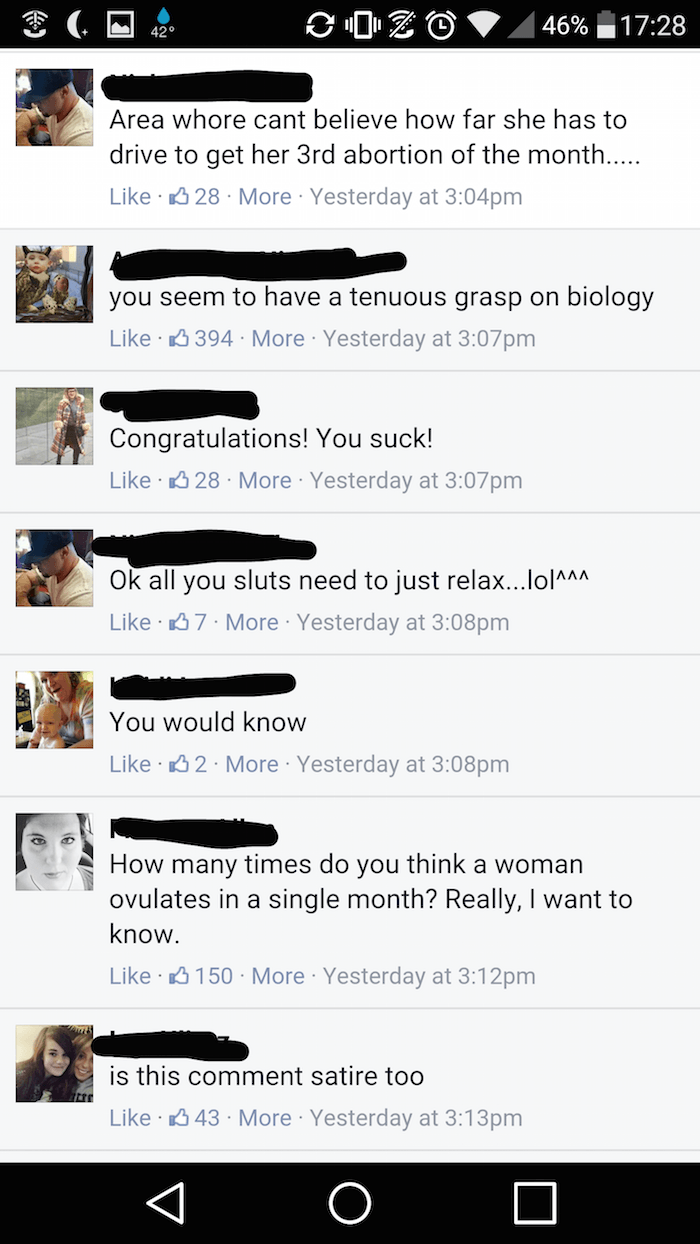 12. User midnasays shared this awful meme which attempt to slut shame women who use pads. 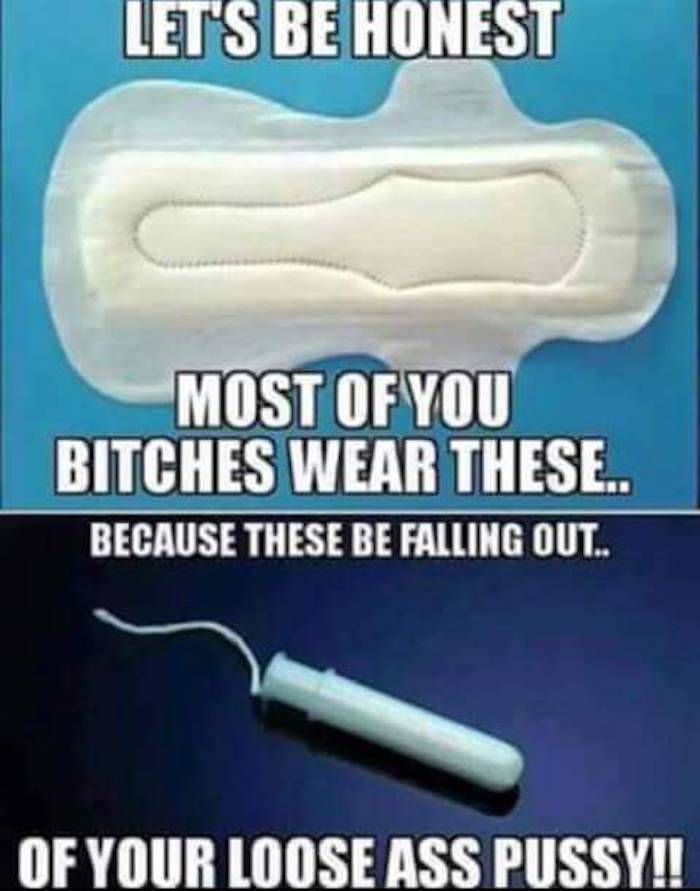 13. This woman believes that she is need of a placenta transplant. 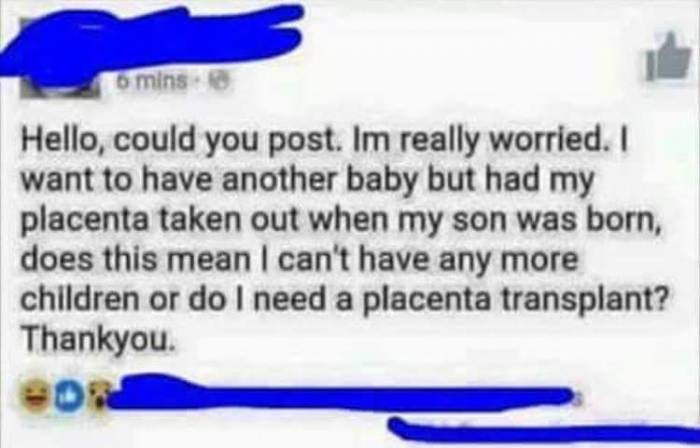 14. An anti-abortion lawmaker asked why women were reluctant to swallow those tiny cameras to no longer have to go through any gynaecological exams.

I know its hard to believe but this guy actually makes laws.

There was a debate going on regarding an anti-abortion bill when a Republican lawmaker asked why women were reluctant to swallow those tiny cameras to no longer have to go through any gynaecological exams.

This question was posted by Idaho Rep. Vito Barbieri to Dr. Julie Madsen, who testified against the bill which proposed that doctors should be banned from giving any medicine for abortion using a webcam if they haven’t met the person in real life before. She had to explain that while the pill will definitely go to the stomach, it won’t go to the vag!na. 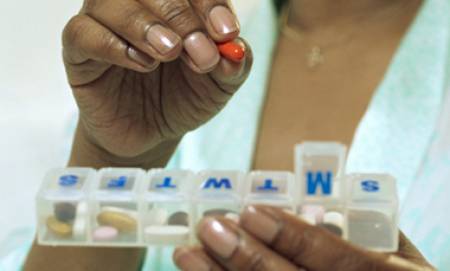